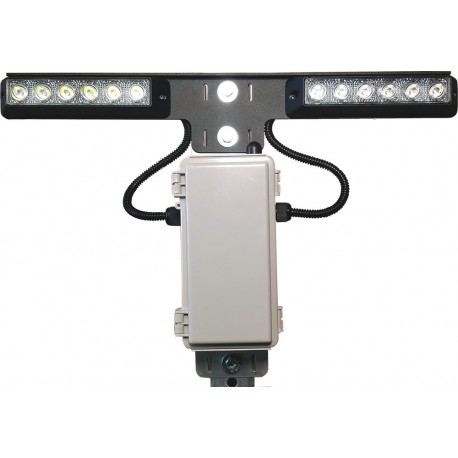 We’ve combined functionality of a traditional speed display and flashing LED speed limit sign to create an effective tool that brings driver attention to the posted speed limit when it is needed. Our LR-15 radar beacons kit includes compact and power-efficient Doppler radar attached to a pair of high-brightness LED beacons.

This product is no longer in stock

LR-15L has proven to be an effective traffic calming tool:

Typically, a Radar Feedback Sign is not capable to make a difference between multiple vehicles that are traveling close one to another. The LR-15 can help eliminate the confusion. It will activate in cases if at least one vehicle in a group moving faster than the programmed speed threshold.

Limited real estate on a pole

It happens very often – multiple signposted on the same pole. As a result, there is no space to install a Radar feedback sign without obstructing other important information.  Thanks to extremely low profile and small footprint, the LR-15 can help in this situation.

Commonly used light signpost is not capable to support the weight of a full-sized radar feedback signs. At the same time, the installation of a stronger wooden or steel post may not be an option. In this case, you may consider using LR-15 as an efficient alternative to a Radar Feedback Sign.

Need for effective traffic calming measures on a small budget?

The LR-15 is the most affordable non-intrusive traffic calming measure on the market. It costs considerably less than a typical radar feedback sign including the installation cost.

LR-15L weel make a SPEED LIMIT sign visible when it is needed!

Drivers are unaware of the speed limit and consistently underestimate their speed. A person can miss a speed limit sign or may not remember the last passed sign.

Of those drivers who stated that they knew the temporary Speed Limit, 76% identified the speed limit correctly. The limited sight distance in work zones increases the possibility that a driver may be unable to see the temporary speed limit.

9 other products in the same category: